I’ve been asked what my office at home looks like. This is the current layout which allows me to remote control 65 Servers and computers that I support throughout the US.

This is my main workstation, a going on 5 year old Dell Precision T5400 with dual Quad Core Intel Xeon E5450’s, 32gigs of memory, an AMD Radeon 6970 (5 monitor capable) and an Intel SSD RAID0 array. Most people hear that my computer is this old and they think it must be slow, compared to a brand new top end model, yes, but it is still more than fast enough for what I use it for. I blogged about the rebuild of this machine when I bought it for a song on eBay.

I also have my Amateur Radio setup here that I remote control with my computer as well. 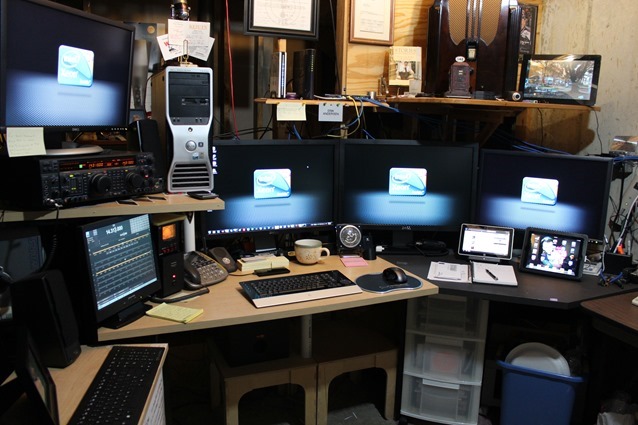 The 2 servers on the right are my test network, this is where I practice my school work labs. I’m in the middle of building a duplicate network of what I have at work so I can do a test migration from Windows Server 2003 to 2008 R2.

There is an HP Slate 500 (bottom left), a useless tablet due to a very slow CPU plus it won’t run Windows 8 (wtf!?) and there is also an iPad that I use. I also have a Philco 16B tube radio that sounds incredible while listening to old time radio. 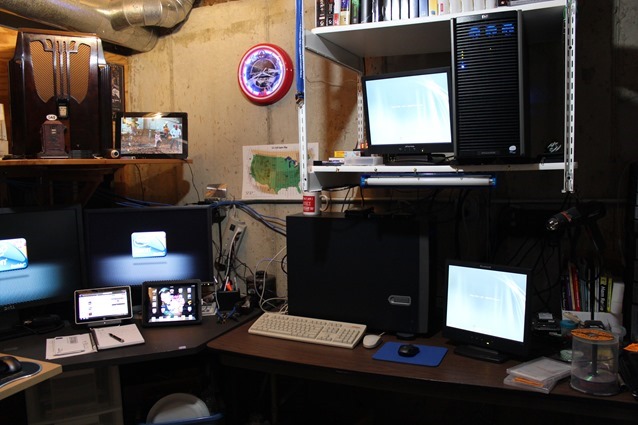 There is nothing this setup can’t do, it’s the first time I have not had the latest and greatest but these days you don’t need that to do the work plus staying on top like that costs way too much money. I’m happy with it as it is for now.

Have a great weekend everybody!

Of course I was instantly drawn to the old Philco..... It has those real valves you know.... Rod

Looks like my workbench at work, except I sit in the room with several hundred servers all running at the same time.

Love working in the Intel LAD team, I've learned a passionate hatred for more and more things with the Cisco sticker on them :p.

Anonymous - I missed your comment so you may not see this. The mic is off to the side because I very rarely use it and that part of the system is normally off.

I was monitoring 313 that day because contrary to the wackos that frequently go there sometimes normal people do to and that day was a good normal QSO day. ;)