Well, we did it, but not the one we thought we would…

The shower in the 3900FB felt like it was made of something just a tad thicker than paper, it was very weak and over all this monster didn’t impress us like we thought it would. The 3825RL was next but who ever designed the bathroom, clearly wasn’t going to use it or was maybe 5ft tall, I could not fit standing in front of the toilet without my rear end hitting the sink…

Wait, I’m getting ahead, the first rig we looked at was inside, it was the 3625RL and it was very nice except for the furniture and the living room slide was too deep, it would hit the power pole at our site and during negotiations they pushed this rig hard, real hard. While we liked this rig, we would have been settling if we chose it, I told them if this was the only rig we could fit into the numbers we would be walking and no sale. The 3900FB and 3725RL were within $1,000 of each other but we were about $4,000 over budget.

I explained we would not spend more than we told them we would spend, not one penny more. The owner took the deal from the finance manager and spoke to his partner and 10 minutes later told the finance manager he didn’t like it (bullshit, he got a sale, he loved it and I know it) but he would sell us the 3725RL for the exact amount we budgeted making everybody involved happy. Come on guys, I know how this game is played, if he wasn’t making a number in profit he was comfortable with he wouldn’t have made the deal.

I’m a capitalist, you sell something you’re entitled to a good profit, but I’m entitled to make sure it swings in my favor if I can. Going by what we have seen at other dealers we got a good deal so enough of the explanation, here is our new Montana 3725RL! We pick it up this coming Wednesday! 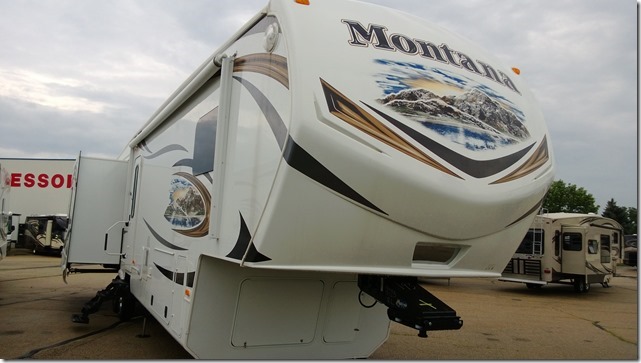 Holy crow, look at the length of that bedroom slide! 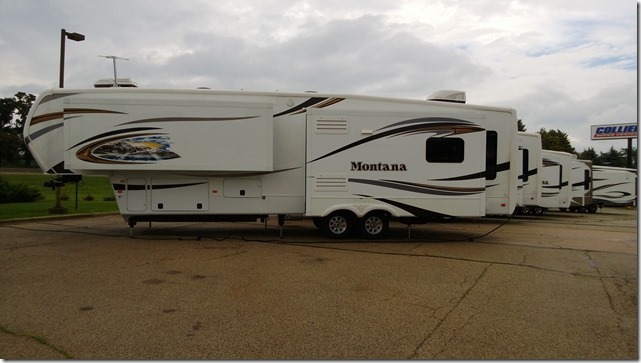 Forgive the picture quality, it was storming and fogging up the camera. Here is the living room, two awesome recliners and a full queen bed built into an awesome leather couch. 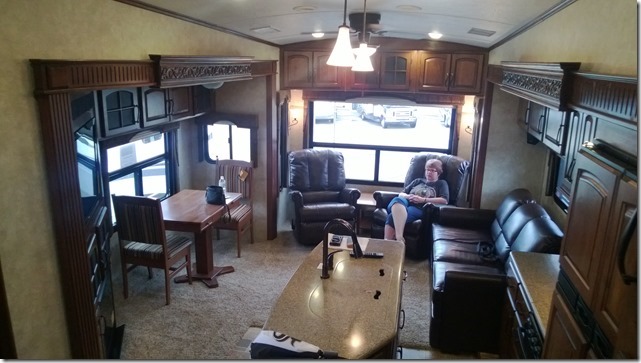 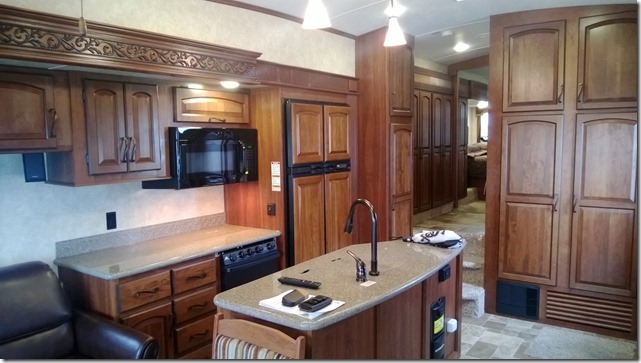 In this hallway is a very large closet that is bigger than my closet at home or can fit a full sized washer and dryer. 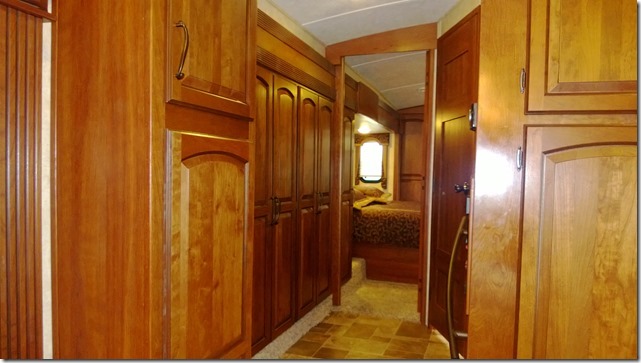 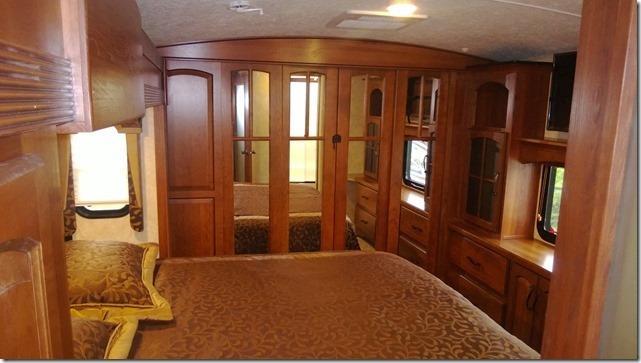 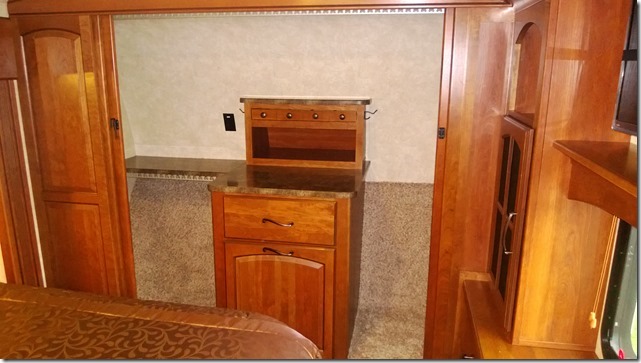 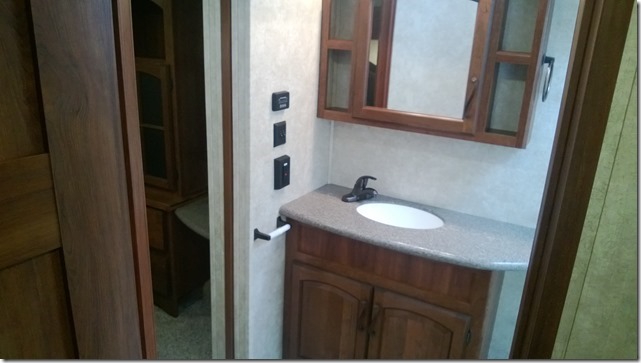 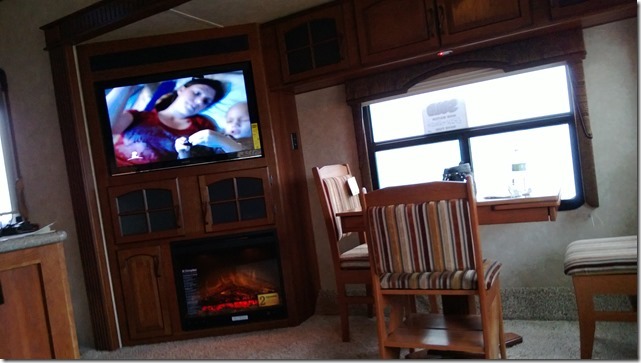 There are a lot more pictures but I’m at the campground, I’ll be lucky if these post. Whew, so that’s over, now for the PDI and delivery process and possibly modifying the deck because the door to the new rig may line up with the railing…. we’ll deal with that after the rain stops and we can do some measuring.

Have a great weekend folks, we’re tired and going to watch a movie and relax…

Steinar - Lets just say, we got more for the Endeavor than we thought we would, the monthly payment is more than the Endeavor but the interest is half and the deal is what we were looking for, in other words call me.

Congratulations! I like where the stairs are for the bedroom and the location of the t.v. It gives you a decent view from all the seating in the living room. Val said "that's what we need for our next rig, so much more like a home". I'm glad the deal (and decision) is done and I can stop checking my computer for an update. Enjoy, I think you two made a fine choice.

It is gorgeous!!
Have fun and enjoy every moment of traveling!!

WOW! What a beauty. It sure is huge. I could live full time in that baby. I hope you enjoy this for many years.

JO, Rae and Jessica - Thanks! We can't wait for Wednesday!

TexCyn - Yeah we have been busy bees! Ronda is singing in the kitchen about how she can't wait until she has a place for her pans and kitchen stuff, she is giddy!

Sam and Donna - For 2 years after this purchase we are going to try and save for a tow vehicle. The requirements are one, it's a Ford 250 diesel or greater, extended bed, extended cab and praying I learn how to maneuver it when the time comes! :)

The rig will stay at Blackhawk until then.

Bruce and Val - You guys should come to Blackhawk again this year! We are so glad this part is over, we're going to miss the Endeavor and we are going to miss going to Geneseo for Halloween as well.

We'll see how it goes!

Looks beautiful. You had so many maintenance issues with your motorhome, so I hope you are able to enjoy this new RV.

Teri - Thankfully it was worth working on, I'm looking forward to the new one.

Steinar - There is no such thing as a worry free anything that has many systems built in. We'll see how the next few years go, I can say this, we're very lucky and we know it.

congrats on your new purchase! it's a beauty!!!

Nice, I like the floor plan to that unit. Dawn and I got a chance to go out this weekend, but didn't really see anything we could afford that we liked.

We looked a fair number of new units, but it was sunday so only two dealers were open and we were in Salem, which isn't known for a large number of RV Dealers to begin with.

Dawn wasn't at all fond of the dark interior with the leather on it, she dislikes leather furniture, though we did see on Montana we did like, but at $58,000 (Brand new), it was well out of our price range.

Matt - We were looking for at minimum darker cherry with leather, funny how it goes 'eh?

I hope you find one you're looking for. I like the Holiday Rambler Presidential Fifth Wheels, and we looked at new Redwoods but they were far too expensive for not much better quality.

The frame's are welded the same on both, the floor quality and build quality seems pretty much the same for the Montana's and Redwood's.

What made the Redwood's stand out was the pantry for the kitchen, Ronda LOVED the pantry set up in them.

I think we got the best of all the layouts that we could find. The couch sticks out a bit too much and the recliners since they are so large have to be pulled out to be able to recline much but we are ok with that.

I can't wait until we pick it up! I am crossing my fingers for you and Dawn to find one you like. :)

This unit is much more practical than the Front Bath allowing room for entertaining if you have Visitors. I'm sure if you look at the specs you will see a noticeable weight difference between the two units. Who knows a few years from now we'll posibly see you towing it down the road exploring this beautiful country. Be Safe and Enjoy!

Rick and Kathy - Right after we left another couple bought the front bathroom 3900FB and they're going to be snowbirds. This would be the worst unit for that considering the utter lack of closet space.

I'm happy with the one we bought, can't wait until tomorrow at 1pm when it becomes ours.

Love the new rig buddy. That is beautiful. Hope all is well with you.

Andy - I missed your comment! Thanks, I hope all is going well with you!