Strike A Big Project Off The List, It kicked My Butt!!

This morning I got up early and hit the garage, it has been on my to do list for going on 5 years. Ever since we sold our Mustang GT’s I have had zero interest in taking care of it so everything just ended up in there. Boxes from purchases, 5 Christmas’s worth of boxes and who knows what else but the place was an out right disaster. Previously I would get the mower or whatever I needed and close the door as fast as I could, I hated people seeing in there and today it happened. I had emptied 90% of the stuff and a jogger came around the corner and I kid you not, screamed holy crap talk about junk!

I’m standing right there but he didn’t see me I guess, when he did see me he quickly looked away and ran faster. I glared back at him and gave him the finger, it was automatic but he didn’t see it, or if he did he ignored it. Now mind you I don’t blame him, but to blurt it out like that, rude pure and simple and it was obvious I was cleaning the place. I wanted to tell him he runs like a 90 year old (he actually does) but why sink to his level, the middle finger was enough.

I didn’t take before pictures of the garage, I want no memory of how it looked because it wasn’t like me to let it get like that. I still have the boxes in there that we will take to the curb this Wednesday, maybe I’ll take a picture of the after when all of the boxes are gone. By the time I finished, well, finished isn’t the correct word, I still have to organize my work bench after the boxes are gone but as I was saying, by the time I was finished my feet were numb, literally and my right forearm was having a full blown charley horse so instead of going inside to relax for awhile I decided to mow the lawn, oh yeah great idea!

It has rained here everyday since Fathers Day so the lawn is very green and very thick so I knew it was going to be a job. My new lawnmower has electric start which is great because my right arm wasn’t functioning at this point. So I cut the lawn and it took twice as long as normal but this machine bags like nothing I have ever seen. My previous Honda was a great mulcher but it bagged like utter crap and it was nearly impossible to empty it into the State mandated size paper lawn bags. So I HATED bagging with the Honda, since the Honda died this spring I bought a very nice Craftsman with electric start and the worst backing up ability of any lawnmower I have ever owned.

I’m digressing a lot here but since I’m on a roll I’ll continue. Who ever decided to put a soft rubber flap on the back of the mower which when you back up causes the wheels to lock making it impossible to go under a pine tree and backup has never cut a lawn, no way. So I devised a method using a rope to keep the flap elevated just enough to not go under the rear deck so now I can back up which makes this mower just about perfect, except it mulches as bad as the Honda bagged, I know I know.

Here is what it does so well I pray this mower lasts 10 years or more. It manages to cram so much grass into its bag that I can cut the entire front yard, the side and a little of the back yard on one bag. It CRAMS the grass into the bag, the bag weighs in around 55lbs when full AND it fits into those ridiculous paper lawn bags we’re forced to use. I managed to squeeze the entire cutting into two of those bags where the Honda would have taken 6 bags easily. Amazing but each full bag weighs in around 85lbs at least but that’s fine, it means I use less of them saving us money.

When I carried the bags back to the front of the garage my right hand clinched and stayed that way for almost half an hour. The charley horse from hell so I took my wife's advice and closed everything up and went to sit down. My clothes were soaked through so I guess I pushed it a bit much today. If you saw the garage you would understand.

So after a good long soaking shower I feel like a new person except I hurt everywhere including the tips of my toes. My knees, back and forearms/elbows are a bit beat up after playing hockey for 20 years so I’m not supposed to push it but it’s supposed to rain tomorrow so I needed to get this job done today. I was amazed that I could get the garage and the lawn done in under 8 hours, thankfully my wife helped breaking down many of the boxes and consolidating them making my job a lot easier! Thanks hon!

We are getting ready for our next trip beginning July 1st to the 4th at Sugar Shores, we can’t wait. I have an update on the RV and the awnings coming up tomorrow or Monday. Have a great weekend folks!

Putting A Shine On

We have had a lot of work done to the rig that we didn’t expect exterior wise because of damage incurred while in storage. So the front of the rig looks like brand new but the sides are dull and the rear cap and the top of the front cap are real dull and chalky. There is a product out there called Red Max and it creates an acrylic shield on fiberglass and other surfaces. A lot of people have used it with overwhelming success on their sun/weather beaten RV’s.

Take a look at the left picture, aside from the one spot that’s obvious the rest looks just plain dull and weathered, even the stripes. The picture on the right shows everything, including the stripes to be shiney and looking new. The owner was unable to get rid of that square dull spot but he did get it to shine.

Anyway, this is what I’m going to do when I figure out how and where the heck I can work on it for an entire weekend. I also plan on cleaning the roof, right now the rig looks disgusting, chalky lines everywhere, black water lines from the new windshield gaskets staining the sides and front of the coach. It’s embarrassing to look at. So I hope to get this done very soon, preferably before our July 4th camping trip which will celebrate our 1 year anniversary owning this RV. We hope to camp from 6/29 to July 4th at Sugar Shores, we were hoping to go to Geneseo like last year but this year will have a lot more family around so we want to be around them. We’ll save a Geneseo trip for later in July or August.

That’s all for now!

To all the Dad’s out there including mine, Happy Fathers Day!

Weekend With The Little Ones

We took our niece and nephew camping this past weekend at Paul Wolff in Gilberts’, IL. My wife brought them to the campground after telling them they were going to our house so the surprised look on their faces was worth the effort. The kids had a blast, unfortunately it was so hot out Saturday night we didn’t have a campfire like we wanted and the gnats were insane, they loved the kids very much! 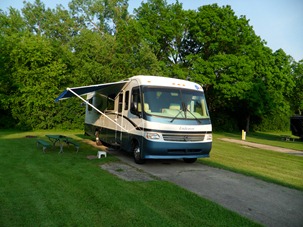 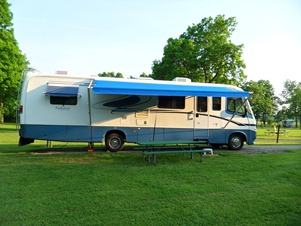 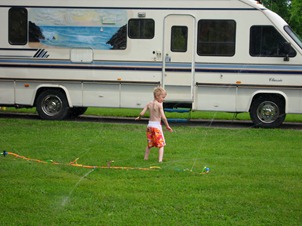 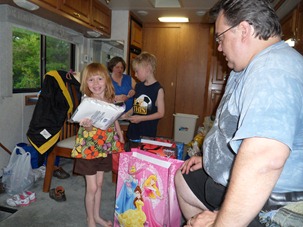 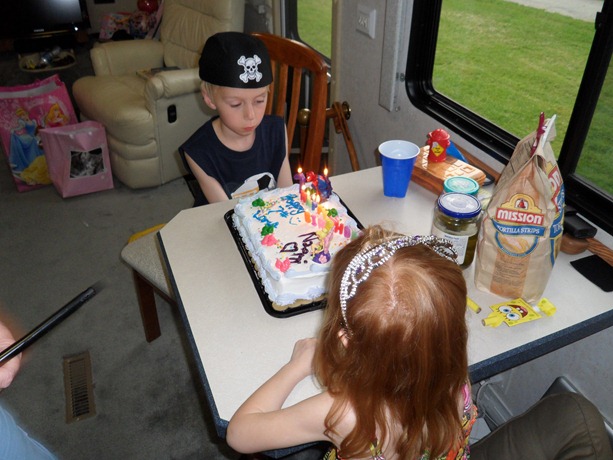