Well, by some miracle the USPS thought they were lost but they appeared at our house today! Apparently they tried to deliver them to a house in Roselle yesterday and the good folks at that house called the postal person who didn’t check the address properly back before they could leave.

Thank goodness for people being home and alert! Hooray!

Here are the Intel E5450 Quad Core Xeon’s installed. I didn’t take a picture of the Arctic Silver #5 that I applied but I did take a picture of the heat sinks installed. The seller of the heat sink was right, it was brand new! The CPU’s work perfectly even though #2 is missing 1 capacitor. I have been stress testing the computer now for over an hour, tomorrow I’ll run a 48 hour burn in and if it passes that test it should be good to go long term.

The system booted up properly and scored an overall Windows Performance score of 7.7, which is fantastic considering it started out before the upgrades at 5.9. The difference is HUGE. Not too shabby for a 4 year old computer I threw parts at! 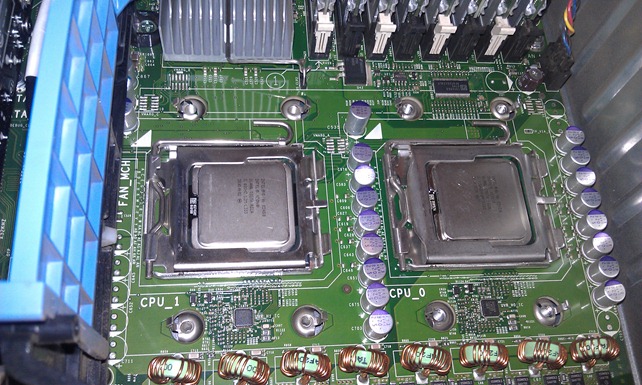 Huge heat sinks that are passive and do a great job. I could have gone with Xeon X5460’s but they are 120 watt’s each and have a rating that wouldn’t have gotten me much more performance for the money but they would dissipate A LOT more heat. 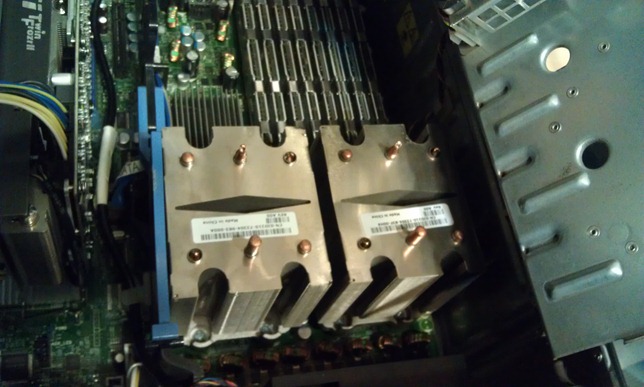 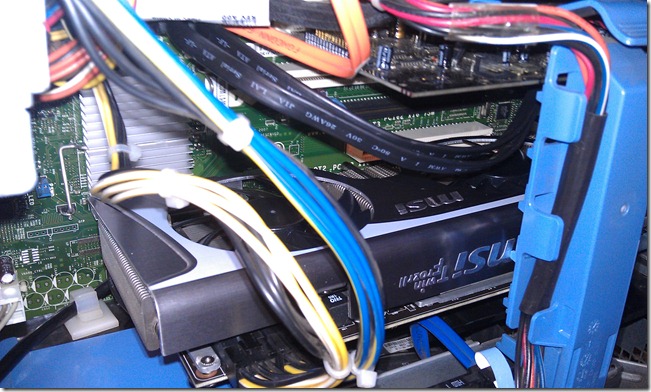 I received the heat sink for the new CPU’s, I received the video card and cables and even the new case sticker. The CPU’s were shipped via USPS, anybody know where they are? Nope, somewhere in Illinois though they know that much!

I never use them to ship anything more complicated than a letter, I wish I could trust them more but they seem utterly incapable of shipping an item without shredding it and throwing it into your mailbox in a baggy filled with useless paper or they lose it or it’s destroyed.

Ummm qualify to speak to customer service? I need to qualify?? They wonder why they are broke?? I have a few ideas…

Here is the video card I decided on, I typically like NVidia but this ATI/AMD card features the ability to hook up 4 monitors natively off of one card. It’s a beast and barely fits but it runs quiet and it’s pretty fast, need the new CPU’s so this thing can stretch its legs though! 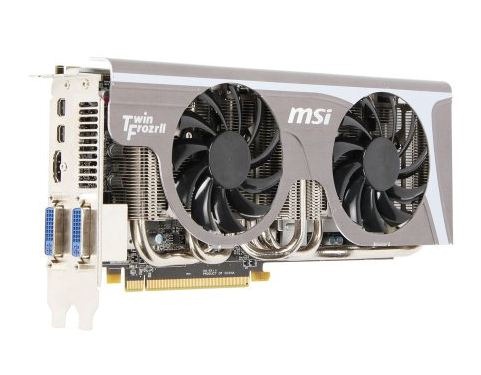 So I put the Mac Pro on eBay with the hopes of selling it for maximum value. MANY people sent messages trying to get me to end the auction and back door sell. eBay is getting like Craigslist where people don’t bother with the rules, it’s getting harder to sell things. My Ham Radio could have sold outside eBay but I told the buyer to bid just like anybody else, eBay gave us the ability to buy this way so they are due their share. I could have put another $120.00 in the bank by going behind eBay’s back but that just doesn’t sit right with me.

The person who bought my Mac tried the same thing, I explained to him that his best option would be to bid, like everybody else and if he wins then great! If not then them there's the breaks. This also protects both of us should something sour during the transaction. He bid and won the system and we scheduled for him to come over and pick it up instead of me shipping it out. My wife worried that a stranger was coming but I explained I don’t let people without a decent bidding history and excellent feedback bid on my stuff so he should be ok. I was worried also, you never know these days but I figure if he tries something we’ll cross that bridge when and if it happens. He came to the house and picked up the Mac, paid cash and everything was fine.

On to what was my quandary, do I build an entirely new machine or try and build up a Dell Precision Workstation machine I acquired?  After pondering this and also researching the cost of building a new machine I found I could easily build a much faster machine than my Mac with just the money I sold the Mac for, I mean a seriously faster machine. BUT, did I need to, how much work do I do on the machine and do I actually play games anymore? Do I need anything super powerful? My gut of course says hell yes!! MORE POWER! (insert Tim Allen grunts here please) Also, how do I represent myself to my customer(s) that I build custom super computers for and here I am with a Dell workstation?? I could point to the Windows Home Server 2011 sitting next to the Dell that is obviously very custom and built by me but do I really need to?

For once my brain won out over my gut, I don’t need a monster computer and nearly zero customers ever see my home office. Besides I could rebuild that Dell into nearly a monster and keep $900.00 of the profit from the Mac in the bank for new tires this Spring for the RV, here's how.

I bought the Dell for somebody else but it refused to turn on without errors so I put it aside and bought another one on eBay. That machine was missing parts so while I was rebuilding my Windows Home Server I removed parts from it and installed them into the 2nd Dell Precision which turned out great! They love the Dell and it worked out great but now I had this non-working Dell that I had to figure out, I bought it as is for very little so I dug into it and replaced the memory with 12Gigs found on eBay and I took the machine apart and cleaned all connectors and fired it up and wouldn’t you know it, fired right up, 2 bad memory modules but I had the exact kind to replace them.

The machine is now running with a single Intel Xeon 5405 2.0GHz 12meg cache Quad Core CPU from 2007. The machine can handle dual cpu’s though he he he.

Don’t think little of this 2.0GHz CPU, it kicks the heck out of faster frequency Core 2 Duos of the same vintage, it’s kind of a step backwards from the Mac but here is what I’m doing. I’m going to pull that CPU and sell it on eBay. I found a pair of matched Xeon E5450 3.0GHz 12 meg cache Quad Core CPU’s on eBay so that’s 8 cores total and they bench a bit higher than the E5462 Xeon’s that were in the Mac. So parity there almost but the Mac has a faster memory system, but not by much, plus I can upgrade the memory to the same speed as the Mac uses in the future. Here is where this little machine opens up a very large lead on the Mac and it just gets better from there.

The Mac had a mechanical hard drive, the slowest component in any computer, period. I bought 2 Intel SSD 320 160Gig hard drives, these are not mechanical, they use NAND memory and provide such a large increase in hard drive performance they make any computer feel MUCH faster. My Mac scored 459 in the Passmark 7 benchmark, the Intel drives scored 3531, that’s like going from a 486 to an i7 CPU or in car terms from a Yugo to a Corvette. 2 SSD 320’s in RAID 0… WOW!

Next I addressed the video, the Dell has an NVidia Quadro 4600, that video card was king back in 2007, not so much in 2012. The new video card is an EVGA GTX 560 Ti FPB Fermi that is about 6 times faster than the 8800GT in the Mac and about that much faster than the Quadro in the Dell, for half the cost of an upgrade in the Mac, easy decision!

So, when the parts get here I will have a Dell Precision that will easily trounce the Mac Pro I sold plus I can still put $900.00 from the sale into the bank for tires. I think I made the smart choice. If after this the Dell has an issue or won’t work properly I sell it and start fresh but I’m hoping the parts I bought will work and this machine will last me 4 years until I am ready for something faster. Windows 9 will be out by then and I’m sure it will have high demands.

That’s it for my geeky post and sorry the only thing relating to RV was the money saved to buy RV tires. The season is drawing near so the RV posts will start anew! Have a great weekend everybody!

Wow, time goes by fast, there hasn’t been anything new on the RV front until today when we actually visited the RV! When we got there I noticed the Endeavor next to us has no white chalk streaking while ours looks horrible from white streaks all over. The mission this Spring, new tires and a full roof cleaning!

I turned the batteries on, unlocked the door and the steps went down, good first sign! I never used to go more than 2 weeks between exercising the rig but it has been over a month since I drove it and checked for mice. I checked the battery status and it showed about 50% for the house batteries. I turned the key and the engine fired up instantly, no strange noises just the purr of the Ford V10, sweet.

I checked for mice and apparently they made a visit, they cleaned all the traps of the peanut butter and made their escape. I knew these new fangled traps were worthless. No mouse poop anywhere so they must have looked for somebody else to mooch off of.

I then checked everything out, all looked good, I primed the generator and she fired right up, sweet! All tires were holding at about 85 psi so we took her for a 10 mile drive and parked her. Man I miss it, I can’t wait for the new season to open! I am going to email Geneseo and make reservations for the weekend of March 30th to maybe the entire next week, we’ll see but no matter what the weather, we’ll be there!

I hope everybody is having a great new year and you’re all very happy. Teri I hope your knee's are mending well and I’ll try and post more soon. I am selling more computer equipment and trying to get the house sorted out but throwing away junk and selling what’s worth selling. Slowly but surely we are making progress.

Until next time, have a great weekend!